ATHENS, GA – A musical monolith with a small-town feel. Athens has musical history that dates over a century, with a reputation right below that of Atlanta and Nashville. However, many Athens residents have no idea how huge their hometown truly is.

Athens’ music hasn’t always centered around the Georgia Theater, around the legendary 40 Watt Club, around the numerous bars and clubs in the downtown area. So where does that older history go in wake of the industrialization and development of 20th century Athens?

“As far as the overall scene here goes, we cover a lot of ground…We’re really lucky in a town of this size,” said Christian Lopez, a librarian in the Richard B. Russell Special Collections Library at the University of Georgia. “Athens is smaller…you can drive from one side of town to the other in fifteen minutes.”

Despite its small size, Athens is known as one of the best places for live music in the southeast. VisitAthensGA cites 25 different locations in the Athens area alone in which the public can go to hear live music. That is not even counting places on the UGA campus like the Hugh Hodgson School of Music, WUGA, and even the Village Summit Dining Commons on some days. Some of the most historic places of music in Athens, however, have been all but erased.

One of the most famous musical demolitions is that of St. Mary’s Episcopal Church, also known as “The Church.” The Church serves as a major landmark for the birthplace of American alternative music; Athens legend R.E.M. were known to practice here often and even played their first gig in the church, a birthday party in 1980. Unfortunately, The Church was demolished in 1990 to make room for the condos that stand there today. All that is left of The Church is “The Steeple,” lying in The Church’s original spot next door to what is now Nuci’s Space on Oconee Street. 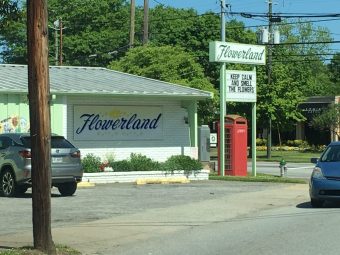 The B-52’s is one of the biggest groups to come out of Athens. It is credited with putting Athens on the national musical map. Their presence motivated musicians from across the region to come to Athens and non-musical locals to begin experimenting with instruments. The group played its first concert in 1977 at 653, which, at the time, was a private residence. Today the home has been demolished and replaced with Flowerland.

Across from The Church, where Waterford Place Condominiums sits, was Stitchcraft, a sewing-factory-turned-practice-space for some of the biggest names in Athens music. An underground club began there and was dubbed “Lunch Paper.” Lunch Paper held monthly shows, but the limited space restricted audiences to the outside while bands played in a sunken room that opened to the outside. Everything was bring-your-own: drinks, food, even seating – some people were known to bring couches. While this club was never official, it held concerts by well-known Athens groups, including R.E.M., The Replacements, and The Primates.

“…Wading through seas of undergrads decked out in monogrammed polos and gingham shorts, taking in the massive frat scene, it’s hard to believe this town is regarded by many as a musical hotbed, let alone the birthplace of alternative rock,” said Zoe Camp for Vinyl Me, Please.

Athens is an incredibly diverse town, with musical tastes that vary as much as any large city. Artists travel to Athens from across the country, whether it be to discover new talent, to record something of their own, or to take a look into the dense history the town holds. Unfortunately, the city failed to appreciate some of the landmarks it once held and replaced them with parking lots and businesses. But Athens’ musical history does not need to be forgotten. These places still hold meaning, still hold a special place in the great American songbook. Athens has a huge mark on American music, whether it remembers that or not.

I’ve got a passion for proofreading that mixes with a love for making good writers great. I find power in storytelling. Words are how we connect, so let’s make them the best they can be.